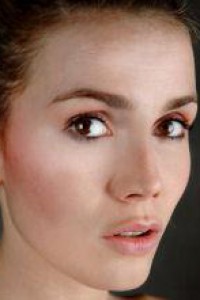 An example of a brilliant, perfectly planned actors career. For a year Olga Bołądź, a graduate of the National Theatre School (PWST) in Cracow, daringly wins the audience’s hearts in Poland. However, her ambitions reach further than Poland: she wants to work at any place where she can find an interesting role. She does not want to follow a set pattern. Each of her roles is distinct.

“Diversity. It is the best thing for an actor”, she claims.

She played a lesbian in the series “39 i pół”, a seductive, bad lover in the series “Teraz albo nigdy” and finally, a determined sister seeking revenge for her brother’s death in the action film “Skorumpowani”.

The director of “Skorumpowani”, Jarosław Żamojda, believed in the young actress and entrusted her the leading part. Olga was a great success also in a convention of the action film. She received very good reviews and was a great asset to the film. Her first serious challenge proved to be a role in the drama movie “Korowód” directed by Jerzy Stuhr. Experience gained from working with outstanding professionals is both her asset and a pass to her future career. She won popularity by playing excellent, character roles in the TV series “Teraz albo nigdy” and “39 i pół”. However, Olga wants to move forward and play for high stakes.

Her beauty is delicate, subtle, very female. Her character – quite the contrary, strong, determined. Very ambitious. Olga knows what she wants and consistently accomplishes her objectives. She can dance and sing anything. These are her two passions apart from acting.

Soon she will start working at the set of a black comedy “Piksele”. Once more, in a different convention and stylistics. Her shy smile gives her an innocent appearance, but usually Olga does not play the roles of polite and nice girls. Characters played by her are more intriguing than sweet.

It might be that in actor’s career chance plays a big part. In order to succeed, one has to be in the right place at the right time, has to be noticed and lucky enough to encounter a good director. Olga has never wanted to leave anything to chance. She relies on education and professional enhancement. That is why:

After beginning her studies at the National Theatre School in Cracow, she started to seek a scholarship to Barcelona. Characteristically, she had her way. For six months she studied at Institudo del Teatro in the capital of Catalonia. While leaving, she did not speak Spanish. She was spending twelve hours a day at school. However, at the end of her stay abroad she was able to play already in a diploma performance “Dell Arte no es trista”. Recently she came back from Los Angeles, where she studied actors techniques at the renowned Stella Adler Academy, the same academy which educated admired by her Marlon Brando, Robert De Niro and Benicio Del Toro.

She used to spend her holidays working abroad. She was improving her English and Italian and learning how to manage behind the scene. She can work hard to reach her aim.

She speaks English, Italian and Spanish. Now she learns Russian.

While her studies at PWST she always sought occasions to perform and learn. She appeared in many performances in Cracow. At the Stary Theatre in Cracow she acted in “Oczyszczeni” - a play directed by a Czech director Peter Zelenka. She also personated the character of Marianna in Michał Grabowski's play “Tartuffe”.

At present Olga is one of the most talented Polish actresses. Not many actresses of her age have such a professional experience. She should make use of it soon, for the good of Polish and European cinematography alike.