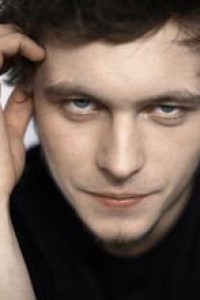 Tomek is terribly gifted. He has dreamt about theatre since his childhood. Despite his love to theatre he attended to science classy.[wiecej] Right after the high school final exams this versatile man matriculated at theatre school for the first time. Strictly speaking he had a choice to study in Warsaw or Cracow, finally he choose the National Theatre School in Cracow.

The time one spends at university is unique. It's time of studies, choices, timeless dress rehearsals, studies of technical acting thoroughly. Tomek decided to devote all time to studying. The producents of the Theatre of Television discovered him and offered him a role in the spectacle "Tajny współpracownik" directed by Krzysztof Lang in which he played Witek.

There is something anxious within him and wild. He draws the attention of the viewers, he captivates people. Both his personal charm and his gift impressed Marcin Wrona, the director of the film "Chrzest", who offered him the main role. He has luck because the play "Versus" directed by Radosław Rychcik at the Nowy Theatre, in which he played, represented Polish Theatre at the Theatre Festival in New York in January 2010.

He played Filip's role in "Iwona, księżniczka Burgunda" who was described as a man who is leading, whose numerous emotions are transformed (from a frivolous person, bisexual womanizer, to a rebelious flesh and bone man who withstands against his parents). His appearance also transformed (he imitates animals, his flexible body suddenly becomes flabby). All of it made his characters great, ambiguous (Hubert Michalak, Nowa Siła Krytyczna, 01.2009).

He plays Jakub from Cloyes in the play "Bramy raju" directed by Małgorzata Bogajewska at the Theatre of Stefan Jaracz in Łódź.

Tomek is already the prizewinner. The play "Dobry człowiek z Syczuanu" directed by Paweł Miśkiewicz, in which he acted, was awarded with the team award at the 26th Theatre Schools Festival. He received the 3rd individual award at the same festival for Eugeniusz Sergejewicz Dorn's role in the play "Mewa" directed by Natalia Sołtysik.

Tomek was born with a silver spoon in his mouth and he feels that luck always supports him. These features and a self-control, a calmness, a submission gave him chances to succeed in front of the camera and on the stage.